Dia Mirza tied the
knot with
Vaibhav Rekhi on February 15 last year and the close-knit affair was attended by close family and friends. She then took the social media by storm announcing her pregnancy and welcomed her son Avyaan with Vaibhav later in May.

The actress had set some great examples for the millions of women with her wedding. Add to it, she smashed stereotypes left, right and centre, refusing to conform to what is considered socially acceptable or normal. In fact, even at her wedding, Dia chose to reinvent traditions in an attempt to endorse gender neutrality and set the right example for the youth.

Since Avyaan came into their life, the Bollywood actress often shares their precious family moments on social media keeping all her Instagram family excited. Interestingly, Dia has also taken her husband Vaibhav’s surname and has even made it official on Instagram. Her profile name now shows Dia Mirza Rekhi.

For the unversed, earlier, Dia was married for 11 years to Sahil Sangha until the two got separated in 2019.

Dia Mirza has often shared glimpses of her son with fans but not without covering his face, either fully or partially. However, earlier this month the actress gave his first full glimpse in a video where he is seen playing peek-a-boo with a stuffed toy. 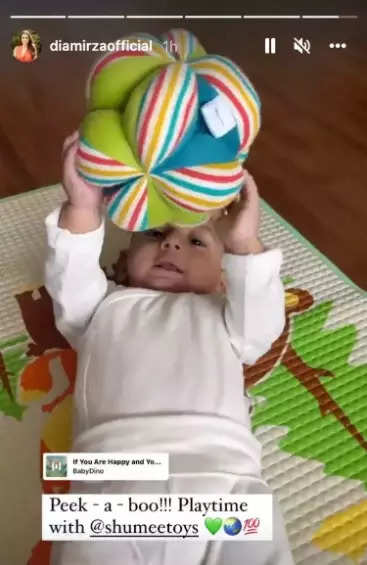 Meanwhile, on the work front, she was last seen in a web series titled, ‘
Call My Agent Bollywood’ where the actor was seen playing a fictional version of herself.